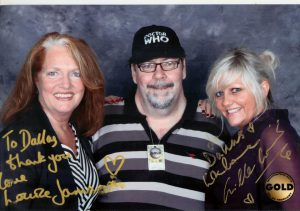 Hi from Dallas.
A little bit about me. I’m a sexagenarian (I just love to be able to say that) born and bred in Sydney (Australia). The first 9 1/2 years of my life our family lived in the inner Sydney suburb of Glebe where as a 9 year old I first saw Doctor Who in January 1965 (actually the 15th as the first episode I saw was the first episode!) A few months later we moved and for the next twenty or so years I lived a bit further out, still with my family, in very well-to-do suburb of Hunters Hill, We lived in a Housing Commission ‘block of flats’ with the nice name of Mornington Court in the locality of Boronia Park but I much preferred telling people I lived in Hunters Hill! It was here that my interest in Doctor Who continued, but I was not an avid viewer and did not watch all the episodes in fact probably only a few, I know that Daleks were not my thing but I really liked the historical stories.

Two things really stood out in my childhood memories of Doctor Who, firstly on 29th December 1966 at the beginning of the third episode of The Ark or as it was shown on the screen “The Return” I was enthralled when the TARDIS landed in the same place!! A few months later I was heartbroken, as an 11 year old, with the sad but heroic decision by Steven to stay behind and help reshape society at the end of The Savages part four. In hindsight I think I must have had a crush on Steven him being tall, blond and good looking!

Two things that definitely affected my life as a boy were that I had been found during a check-up at school back when I was 6 that I was blind in one eye and further tests showed that I was myopic in the other, thus I wore glasses. This meant that I was not very hand-eye coordinated (i.e. not very good at sport) but I really enjoyed reading! At high school (good old Hunters Hill High) I became a library monitor and one thing I was proud of, as a 13 year old, was the number of books I read, I was very satisfied that I could use up my library borrowing record card so quickly. One of the genres that I found that interested me was science fiction and I have particular memories of reading the Undersea Trilogy of books by Jack Williamson and Fredrick Pohl and being totally immersed in reading Tolkien’s Lord of the Rings (I did not begin with The Hobbit as when I started to read it I thought it was too childish!) My reading tastes were eclectic as I also enjoyed the Swallows and Amazons books of Arthur Ransome plus I read (not just flipped though) non-fiction books on history and astronomy. My interest in Doctor Who seemed to pick up with the introduction of the Ice Warriors  in September of 68 (I do remember watching The Power of the Daleks in July 1967 to see the new Doctor but I have no memory of seeing The Highlanders so it appears that the cosmic hobo was not my cup-of-tea). I loved the whole idea of a future England in the grip of an Ice Age.

A few years later in August 1971 I know that Pertwee made an immediate impression; especially the Autons and I have a clear memory of buying my first piece of Doctor Who merchandise in 1973 when I found that the Radio Times 10th Anniversary special was being sold at a local newsagency! I immediately picked up one from the large pile and I still have that issue (which later on I got Pertwee to sign).

In 1974 I was off to Uni, (Sydney University to be precise), just down the road from where my family had lived back in Glebe. At the O Week (O for orientation) I joined three clubs, the photography club, the cricket club and the science fiction club which was called Sydney University Science Fiction Association (SUSFA) and within a few weeks had dropped out of the cricket club (I was not very good) and found the photographic club very upright and unfriendly but was really enjoying myself with SUSFA as they had SF books I could read and a friendly bunch of people. By the next year I was club librarian and the following year (1976) at the AGM (held at the beginning of the year) Tony Howe turned up and by the end of the meeting he was president (despite not being a member of the club when he arrived)! Tony was a true-blue Doctor Who fan, and also joining that year was Kerrie Dougherty another dedicated Doctor Who fan and their enthusiasm for the show rubbed off on me and as you say the rest is history!