30 April: Filming commenced at Tredegar House in Newport, with The New Parlour, Side Hall and Morning Room closed. Filming continued to 2 May.

30 April: The ABC began a new repeat screening of stories from ‘Rose’ onwards, on their main channel at 6pm, Monday to Friday, with a repeat the following morning at 10 am.

24 April: The BBC announced that from April 2019, it will no longer be possible to register with Mixital website or submit any new content and from April 2020 it will be removed from public view. Mixital was launched in 2015 and was designed with easy-to-use tools for young people over 13 years old to make and share things like visuals and stories. It inspired Doctor Who fans to make games, videos, animations and scripts. Nearly 100,000 original games were submitted using the game maker kit, that featured all the Doctor Who characters, and thousands of scripts were sent in.

23 April: Edward Kelsey who played Edu in ‘The Creature from the Pit’, Resno in ‘The Power of the Daleks’ and a Slave Buyer in ‘Romans’ died aged 88

19 April: It was reported that William Russell, and his son Alfred Enoch, were currently in Brazil filming Medida Provisória (Provisional Measure). This was the first time they had worked together.

19 April: It was announced that Good Omens, a 6-part TV series based on the novel, of the same name, by Terry Pratchett and Neil Gaiman and starring David Tennant, will feature “seven or eight” references to Doctor Who. It will be released on 31 May by Amazon.

17 April: It was announced that the Doctor Who Series 4 Blu-ray Steelbook were to be released on 27 May.

17 April: BBC Studios announced the 2019 Doctor Who Fan Art Competition. Artwork must feature both the TARDIS and one Doctor. It will feature on a Doctor Who t-shirt. The competition closes on 15 May.

17 April: Candy Jar Books announced that the YA novel The Lucy Wilson Mysteries: Curse of the Mirror Clowns by Chris Lynch has been nominated for the Scribe Awards from the International Association of Media Tie-In Writers. The Lucy Wilson Mysteries is a licensed Doctor Who spin-off that features the granddaughter of Brigadier Lethbridge-Stewart. Big Finish also secured nominations at the Scribe Awards, three for Doctor Who releases; The Calendar Man by AK Benedict; The Invention of Death by John Dorney and The Master of Callous by Guy Adams and James Goss plus one for Blake’s 7: The Way Ahead by Mark Wright and one for Dark Shadows: The Girl Beneath the Water by Lila Whelan. The awards will be given out in July

16 April: Red Nose US announce a competition for fans to win a breakfast on-set with Jodie.

16 April: Doctor Who: The Collection – Season 10 Blu ray announced to be released on 8 July.

15 April: BBC Digital released a trailer for their forthcoming virtual reality film, Doctor Who: The Runaway

13 April: It was announced that Sherlock was the nation’s favourite television theme tune with Doctor Who coming in second in a poll conducted by Radio Times magazine, the BFI and Classic FM.

13 April: Two narrated full-cast TV soundtracks, ‘Galaxy 4’ and ‘Destiny of the Daleks’, were released. They were available exclusively from independent record shops as part of Record Store Day. They were both 2 LPs and were on heavyweight ‘Splatter’ vinyl. 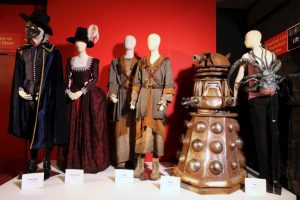 10 April: Reported that the Doctor Who film crew filmed at Roath Lock Studios 8 -10 April. Actors and extras were on set dressed in extravagant and elaborate costumes, jewellery and hairstyles and strange makeup, some with gems on their lips. Jordan Ring, known as the contestant ‘The Hulk’ on the reality show Love Island posted a photo of himself, which has since been taken down, in his Doctor Who costume and makeup.

9 April: It was revealed on twitter that Lee Haven Jones is the director of the current block of filming – Block 2 and actress Julia Foster was cast in one of the episodes in the block,

7 April: Ron the Dalek appeared on the stage of the London Palladium in the first episode of Britain’s Got Talent for 2019. He ‘sang’ Bobby McFerrin’s worldwide hit song Don’t Worry Be Happy.

1 April: The Doctor Who production crew and cast flew into Tenerife in the Canary Islands. They started work on filming 2 April, in a landscape dominated by pines growing in volcanic soil, around Montaña Samara near Mount Teide. The film crew were based in Los Gigantes, a resort town in the Santiago del Teide municipality on the west coast of the island. On 5 April they travelled to the other end of the island to Santa Cruz to film in front of the Auditorio de Tenerife, a futuristic designed auditorium.

29 March: It was reported that Shane Rimmer died at the age of 89. He played Seth Harper in ‘The Gunfighters’, and also read the audiobook of the serial’s novelisation. He also provided the voice of Scott Tracy in Thunderbirds.

28 March: Big Finish Audio Productions announced that Paul McGann and Eric Roberts will be facing off against each other for the first time since the Doctor Who television movie was released in 1996 – 23 years ago. They will appear together in the upcoming audio boxset Ravenous 4, due out in October.

28 March: Doctor Who was nominated for a BAFTA award as the ‘Must See moment on television in 2018’.

28 March: On twitter Ed Moore revealed he was the Director of Photography on the current Block of filming. Bradley Walsh was photographed in costume, in a tuxedo, while in an airplane hangar at a Ministry of Defence unit in the village of St Athan in Wales. An old railway tunnel on Barry Island, which is now used as a shooting range, was once again utilised by a Doctor Who film crew. 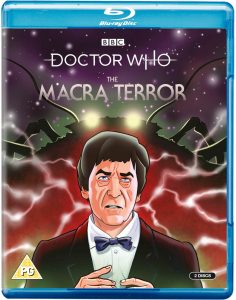 21 March: It’s My Shout Ltd, a company specialising in finding and developing new talent for their broadcast partners, BBC and S4 announced that they are offering 5 paid training opportunities on Doctor Who. They seek to address the under-representation of diverse talent within BBC Drama and are actively encouraging applicants from diverse backgrounds, disability and lower Socio-Economic backgrounds to apply by Sunday 31 March 2019. Applicants will know if they have been selected for an interview by 5 April 2019 and if successful, will need to be available for interviews on the week of 8 April 2019. They will be fully available for training for 11 weeks from 29 April to 12 July. The five roles are: Junior Graphic Designer; Costume; Carpenter; Floor Runner and TV Electrician:

21 March: An archive of photographs and copies of plans from ‘The Power of the Daleks’ and also 13 copies of plans for interiors for ‘The Wheel in Space’, were offered as a single lot, estimated at £800-1200, in the eclectic Fine & Decorative auction in West Norwood, south London. The collection was owned by the late production designer and art director, Derek Dodd (1937-2018), who made set designs for ‘The Power of the Daleks’ and ‘The Wheel in Space’. It sold for 4,600 pounds.

20 March: According to her online CV, Molly Harris will play a character named Suki Cheng in an episode directed by Jamie Stone as part of Block 1. She was in South Africa for filming including some location filming at Kogel Bay.

19 March: An area of the Glamorgan Building of Cardiff University was set-dressed as Bois de Boulogne, a park in Paris, for another night shoot.

18 March: A night shoot at the Cory’s Building on Bute Street in Cardiff.

18 March:  Big Finish announced that Katarina will appear in their audios, re-cast to be played by Ajjaz Awad.

15 March: Jodie Whittaker did a promo video for Comic Relief, as the Doctor.

14 March: Night shoot on Barry Island with Bradley Walsh in formal attire. Walsh also filmed the next day with his co-stars, Mandip Gill and Tosin Cole also in formal attire in Barry, Wales.

11 March: Filming for Series 12 with Mandip Gill at at a set dressed Cardiff Central Police Station on the campus of Cardiff University, as the headquarters for the Hallamshire Police.

10 March: 87 Daleks assembled in Chippenham, Wiltshire in a bid to break a world record. The record was set in Leicestershire in 2008 when 95 Daleks gathered.

8 March: It was announced that Jodie Whittaker is one of more than 100 women who will receive the Freedom of the City of London to commemorate the centenary of female suffrage. The nominees are drawn from a wide range of backgrounds, but all of them have a connection to the City. Jodie Whittaker trained at the Guildhall School of Music & Drama, based in the City Of London. The Freedom of the City of London is believed to have begun in 1237.

1 March: Someone You Loved by Lewis Capaldi which has a music video starring Peter Capaldi, (Lewis’s dad’s second cousin), is UK number one single.

1 March: Demon Music Group’s vinyl record of The Daleks’ Master Plan released. It reaches no 10 in the UK Vinyl charts in its first week of release.

February 28: Bradley Walsh filmed for Series 12 at Cardiff and Vale College at the Dumballs Road campus in Wales.