30 June: Jenna Coleman won the 2019 Logie Award for ‘Most Astounding Actress’ for her performance in Cry. The awards ceremony aired live on the Nine Network.

30th June: It was announced that a Children in Need charity album to be called Got It Covered will be released later in the year. The album will see each of the participants pick a song to cover that is of significance to them. People who will appear on the album include; Jodie Whittaker, David Tennant Olivia Colman and Jim Broadbent. Accompanying the album’s release will be a 60-minute show on BBC One which will follow the recording process at Abbey Road and Rak Studios.

29 June: BBC Radio 4 Extra announced they will broadcast a special programme, The Jon Pertwee Files, celebrating the centenary of Jon Pertwee’s birth, presented by his son Sean Pertwee on Saturday 6 July at 8:00am, with repeats at 3:00pm and then late evening at 3:00am. It will also be broadcast at 4:00pm on BBC Radio Solent on Sunday.

27 June: Revealed that the Spotlight CV of actor and comedian James Buckley lists him to be playing a character named Nevi in Series 12.

26 June: Big Finish announced to celebrate 20 years of Doctor Who on audio, they will present, along with BBC Studios, a 20-hour weekend live stream marathon of Doctor Who audio dramas on YouTube on 20 and 21 July. They also announced that Doctor Who: Wave of Destruction will be released as a limited edition run of 1500 copies on ocean swirl vinyl – only available in the UK, in Sainsbury’s stores on 19 July.

22 June: 2019 Eastern Eye Awards saw Vinay Patel win the for Best Scriptwriter for Demons of the Punjab and Mandip Gill won People’s Choice Award voted for by the public and the readers of Eastern Eye newspaper.

22 June: Big Finish announced that for the first time since 1981, Tom Baker, the 4th Doctor, and Adric, played by Matthew Waterhouse, will join forces. Volume one of series nine of The Fourth Doctor Adventures, set for release in January 2020, will feature two stories: Purgatory 12 by Marc Platt and Chase the Night by Jonathan Morris.

21 June: William Simons who played Mandrel in The Sun Makers passed away, aged 78.

21 June: Doctor Who 2020 Annual announced with release date of September 11.

20 June: Fathom Events announced The End Of Time will screen in a number of movie theatres in the United States on 7 August, the screening will also include a new interview with David Tennant, in which he reflects on his time in Doctor Who and all that has happened since. 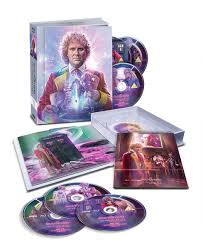 15 June: Planet of the Daleks screened at BFI Southbank, with some updated visual effects and a 5.1 stereo surround mix, followed by a conversation with the Katy Manning.

12 June: Character Options announced merchandise that will be available later in the year from local B&M stores in the UK. The Tenth, Eleventh and War Doctor’s sonic screwdrivers, from the 50th anniversary episode, will be in a new blister-pack. A set of three Doctor & Dalek Twin Packs, inspired by the audio series from Big Finish with one a new take on the Eighth Doctor, plus the Dalek Interrogator Prime, as featured in In the Garden of Death. The two additional Doctor and Daleks sets to be released from this range will feature the Seventh and War Doctors respectively. Two TARDIS & Doctor sets will be released and three collector sets with a range of three figures in each, from the adventures of the Second, Fourth, Sixth and Seventh Doctors.

11 June: The US streaming service Pluto TV launched a Doctor Who TV channel which saw over 200 episodes of the Classic series screened for free for American fans.

10 June: It was announced that an audio album titled Doctor Who At The BBC Volume 9: Happy Anniversary will be released on 4 July. It features two BBC Radio 2 shows that celebrated Doctor Who‘s 50th anniversary. Who Is The Doctor? was presented by Russell Tovey and Graham Norton hosted a special edition of his Saturday morning Radio 2 show.

4 June: BBC Studios has announced that The Faceless Ones will be the next animated Doctor Who release. The six new animated episodes are being made in full colour and high definition and will be released on DVD, Blu-ray and an exclusive steelbook in 2020. The release will also include surviving archive material from the original 1967 production.

3 June: Paul Darrow died at the age of 78 after a short illness. He is best known for playing freedom fighter Kerr Avon in the Terry Nation series Blake’s 7. He appeared in two Doctor Who stories, Doctor Who And The Silurians in 1970 playing Captain Hawkins a UNIT officer and Timelash in 1985 playing Malin Tekker.

30 May: A Deluxe Edition of The Doctor Who Magazine #539 was released with a special cardboard sleeve and an exclusive vinyl EP featuring rare and bonus tracks from The Evil of the Daleks, an extra mini-magazine about the making of the Thirteenth Doctor’s episodes, audio downloads from BBC Audio and Big Finish, and a bookmark

29 May: Big Finish announced that two unmade stories to be released in November; they are The Ultimate Evil by Wally K Daly and Nightmare Country by Stephen Gallagher.

27 May: Release of Doctor Who Series 4 Blu-ray Steelbook.

26 May: The actor Stephen Thorne died at the age of 84.He appeared in the 1971 story The Dæmons, where he portrayed Azal, in 1972 he played Omega, the renegade Time Lord fighting The Three Doctors and in 1976 he played the male form of Eldred in The Hand of Fear. He also played a ‘First Ogron’ in Frontier in Space.

25 May: At MCM Comic Con London people were able to try out The Edge of Time, the upcoming Doctor Who Virtual Reality game set for release in September.

24 May: The UK supermarket ASDA launched a Limited Edition run of 1,000 copies on neon green vinyl of the Big Finish audio Doctor Who: The Creeping Death starring David Tennant and Catherine Tate.

22 May: Series 12 filming occurred around Gloucester Cathedral and inside the cathedral on 23 May. More outside filming on 24 May.

21 May: Ian Fraser died at the age of 76. He was Production Manager for Terror of the Vervoids, The Ultimate Foe, Paradise Towers, Remembrance of the Daleks, The Greatest Show in the Galaxy and The Curse of Fenric. He’ll also appeared as a “Tourist at Windsor Castle” in Silver Nemesis. 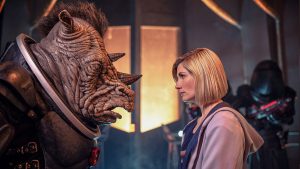 21 May: BBC announced the return of the Judoon in series 12. They will be voiced by Nicholas Briggs. In the same episode will appear Neil Stuke, known for recent work in Doctor Foster, Silk and Silent Witness.

20 May: Emma Sullivan revealed as a director for the season, as discovered from the CV of the First Assistant Director Guy Murray-Brown.

17 May: The ABC stops screening Doctor Who with Parting on the Ways.

16 May: Doctor Who: The Runaway a Doctor Who VR film launched in UK and is available for free on the Oculus Store, Vive Port and on the BBC VR App, and can be viewed on a range of VR headsets.

16 May: Demon Music Group announced the release of The Evil of the Daleks on vinyl on 12 July, priced at £67.99. The seven episodes will sit across four heavyweight 180 gram vinyl records in translucent red. The first LP is presented with a TARDIS laser etched reverse.

15 May: Entries to the 2019 Doctor Who Fan Art Competition closed.

15 May: The 2019 TV Choice Awards announced that Doctor Who has been nominated in the longlist for Best Family Drama alongside Jodie Whittaker for Best Actress. Voting to win a place on the shortlist closed on 31 May, The awards ceremony will be held at the London Hilton on Park Lane on 9 September.

14 May: The writer Tommy Donbavand died at the age of 52. He wrote over 100 books for young readers, including the Scream Street series and wrote the Doctor Who book Shroud of Sorrow featuring the Eleventh Doctor.

11 May: Doctor Who Club of Victoria celebrated their 40th anniversary with a river cruise with guest Alexandra Tynan.

10 May: Paul Condon, Doctor Who mega-fan, died at the age of 48. He had a career working for the BBC (mostly) and ITV (briefly), eventually rising to his last position as iPlayer Content Delivery Manager as well as production and/or website duties on many other BBC shows, including Doctor Who.

9 May: This Classical Life on BBC Radio 3 paired musician and presenter Jess Gillam with Doctor Who composer Segun Akinola. Together they discussed their musical loves and new discoveries.

6 May: Filming on Series 12 at the Cory’s Buildings on Bute Street in Cardiff untill 10 May.

4 May: Doctor Who: Free Comic Book Day 2019 comic released written by Jody Houser, with art by Giorgia Sposito. The regular cover was by Will Brooks, but Forbidden Planet had an exclusive alternate cover by Jessica Martin.

2 May: It was announced by the BFI that Planet of the Daleks is to be screened at BFI Southbank on 15 June with some updated visual effects and a 5.1 stereo surround mix, followed by a conversation with the Katy Manning. Tickets £15.